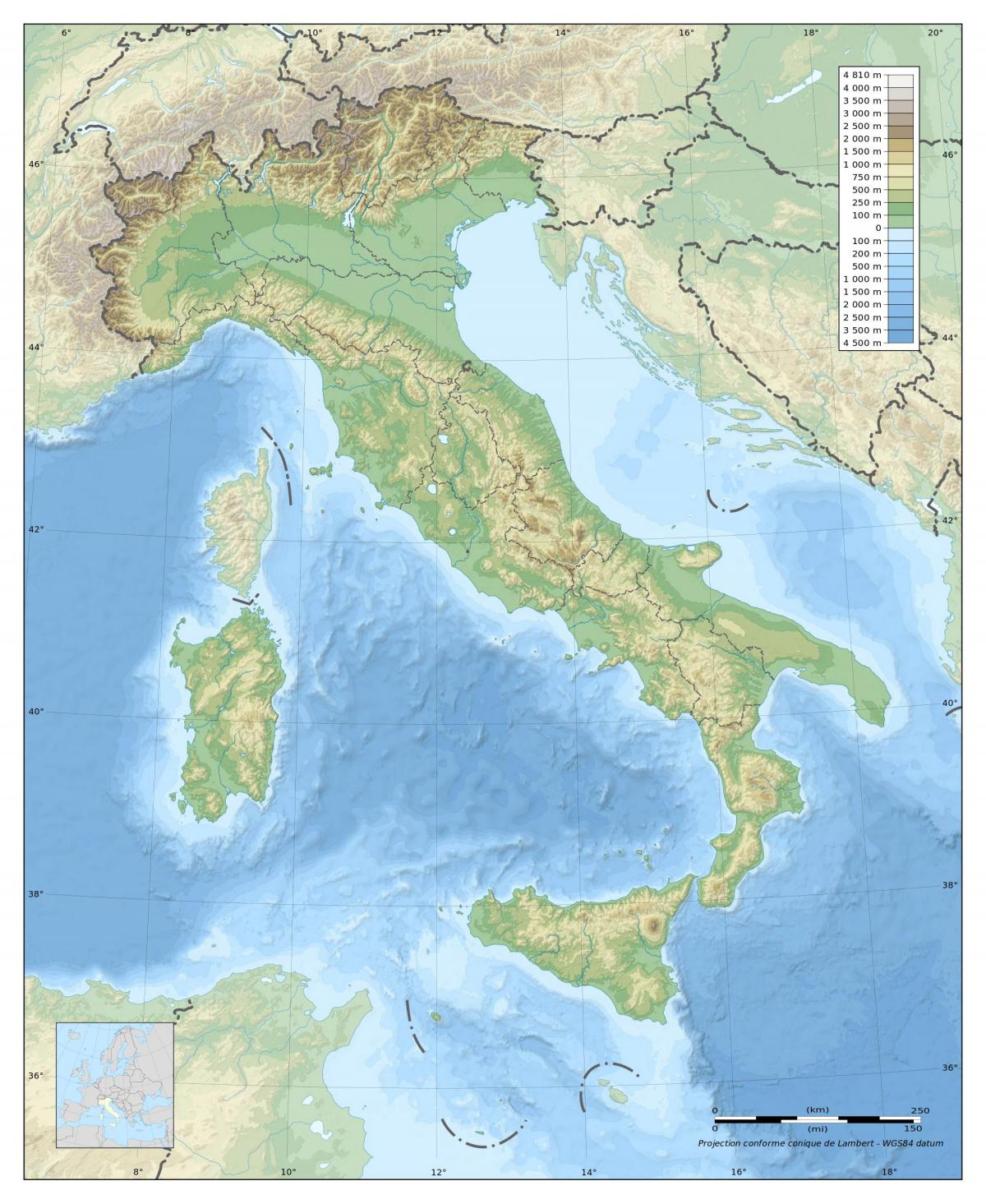 The Apennine mountains cut down the center of Italy, stretching from north to south, dividing the east and west coasts as its mentioned in Italy physical map. Italy is mostly mountainous with ranges over 700 metres covering a third of the country. The best known physical ranges are the Alps, the Dolomites and the Apennines.

Italy distinctive shape, like a boot jutting into the Mediterranean, maybe the country best known physical feature. While the proximity to the sea has had an unquestionable influence on the nation, many other features of Italy landforms are equally prominent in its development and noteworthy from a geographical perspective. Italy has among the most famous active volcanoes on earth, with Vulcano, Stromboli, Etna and Vesuvius all threatening eruption at any time as you can see in Italy physical map.

In between Italy Alpine borders and the Lombardy Plains to the south, the country lake district features many large freshwater lakes. Shaped by glaciers from the Quaternary Ice Age, the subalpine lakes are exceptionally deep and ringed with unusually fertile soil as its shown in Italy physical map. Italy unusual shape, an extremely narrow and long peninsula, culminates in a cluster of islands at its southern end. Many of the islands are volcanic in origins, such as the Aeolians and the Pontines. 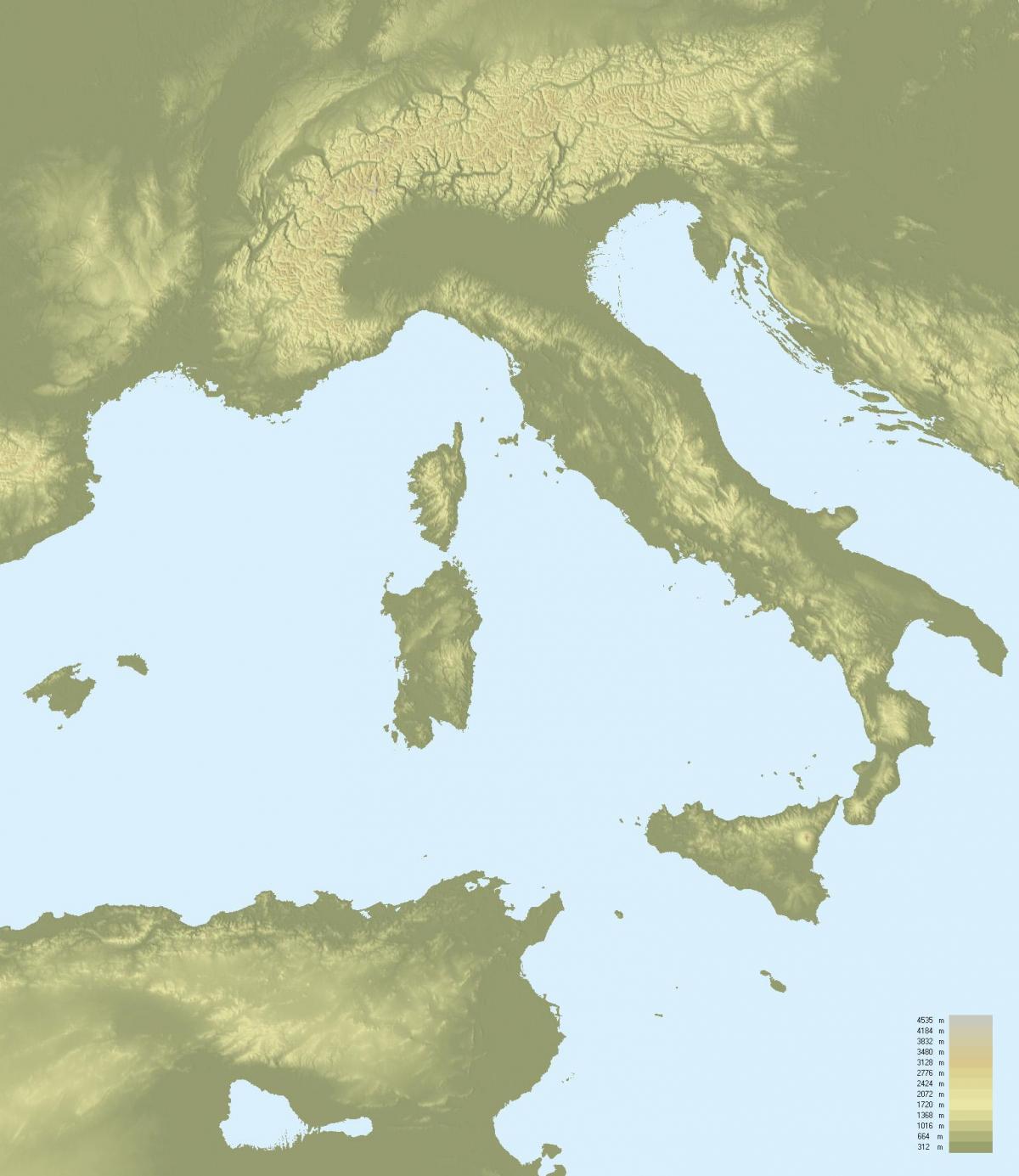 Except for the fertile Po River Valley in the north and the narrow coastal belts farther south, Italy mainland is generally mountainous, with considerable seismic activity. While altitudes are lower in southern Italy as its mentioned in Italy topographic map, the Calabrian coast is still rugged. Among the narrow, fertile coastal plains, the Plain of Foggia in northern Apulia, which starts along the Adriatic, and the more extensive lowland areas near Naples, Rome, and Livorno (Leghorn) are the most important. The mountainous western coastline forms natural harbors at Naples, Livorno, La Spezia, Genoa (Genova), and Savona, and the low Adriatic coast permits natural ports at Venice (Venezia), Bari, Brindisi, and Taranto.

Sicily, separated from the mainland by the narrow Strait of Messina, has the Madonie Mountains, a continuation of the Apennines, and the Plain of Catania, the largest plain on the island. Mount Etna (3,369 m/11,053 ft) is an isolated and active volcano in the northeast as you can see in Italy topographic map. Sardinia, in the Tyrrhenian Sea, is generally mountainous and culminates in the peak of Gennargentu (1,834 m/6,017 ft). The largest and most fertile plains are the Campidano in the south and the Ozieri in the north. The principal bay is Porto Torres in the Gulf of Asinara.

The country is situated at the meeting point of the Eurasian Plate and the African Plate, leading to considerable seismic and volcanic activity. There are 14 volcanoes in Italy as its shown in Italy topographic map, three of which are active: Etna (the traditional site of Vulcan smithy), Stromboli and Vesuvius. Vesuvius is the only active volcano in mainland Europe and is most famous for the destruction of Pompeii and Herculanum. Several islands and hills have been created by volcanic activity, and there is still a large active caldera, the Campi Flegrei north-west of Naples. 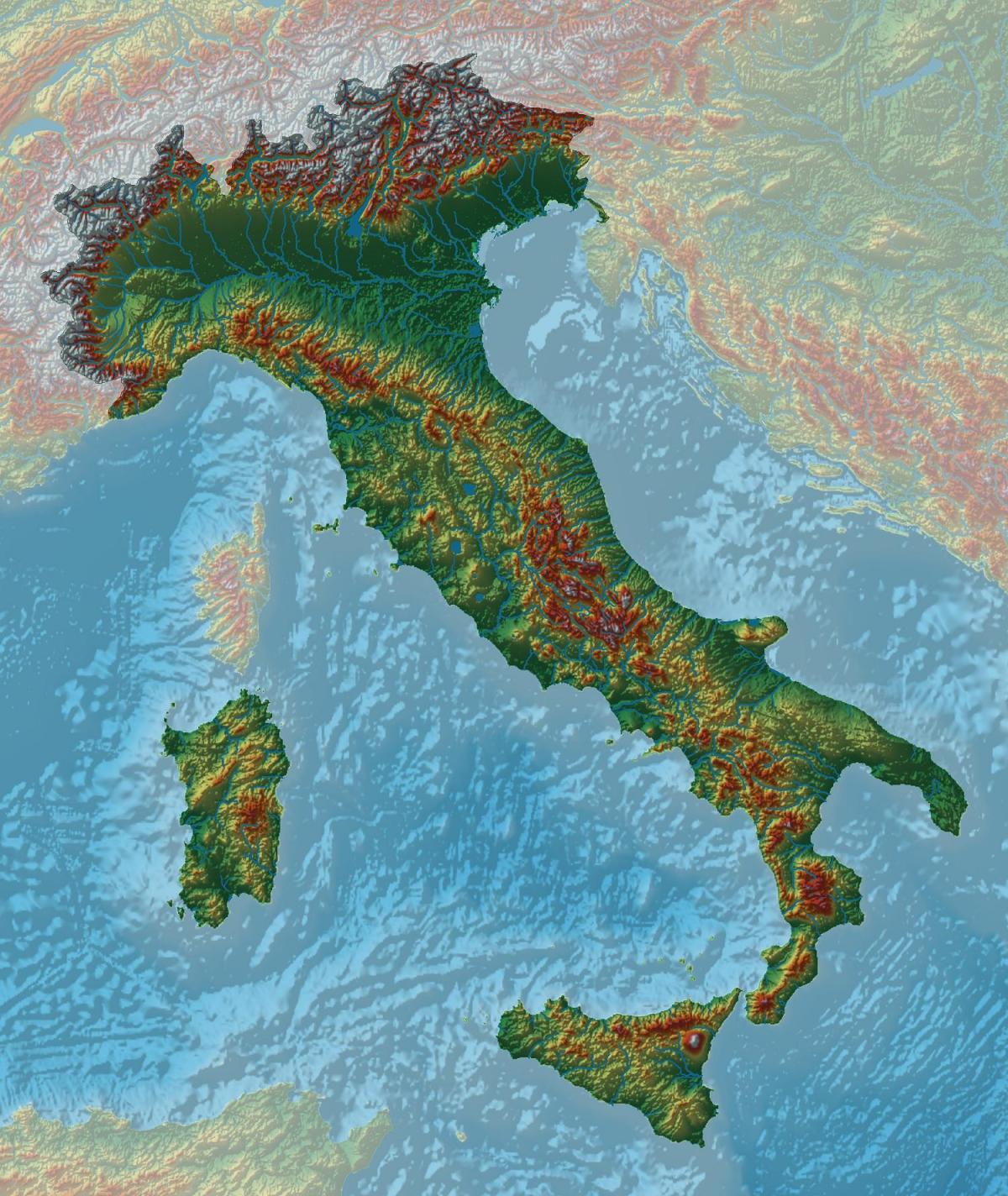 The summit of Mont Blanc is a thick, perennial ice and snow dome whose thickness varies, so no exact and permanent summit elevation can be determined. But accurate measurements have been made. For a long time its official elevation was 4,807 m (15,770 ft) as you can see in Italy elevation map. Then in 2002, the IGN and expert surveyors, with the aid of GPS technology, measured it to be 4,810.40 m (15,782 ft 2 in). After the 2003 heatwave in Europe, a team of scientists re-measured the height on 6 and 7 September. The team was made up of the glaciologist Luc Moreau, two surveyors from the GPS Company, three people from the IGN, seven expert surveyors, four mountain guides from Chamonix and Saint-Gervais and four students from various institutes in France. This team noted that the elevation was 4,808.45 m (15,775 ft 9 in), and the peak was 75 centimetres (30 in) away from where it had been in 2002. 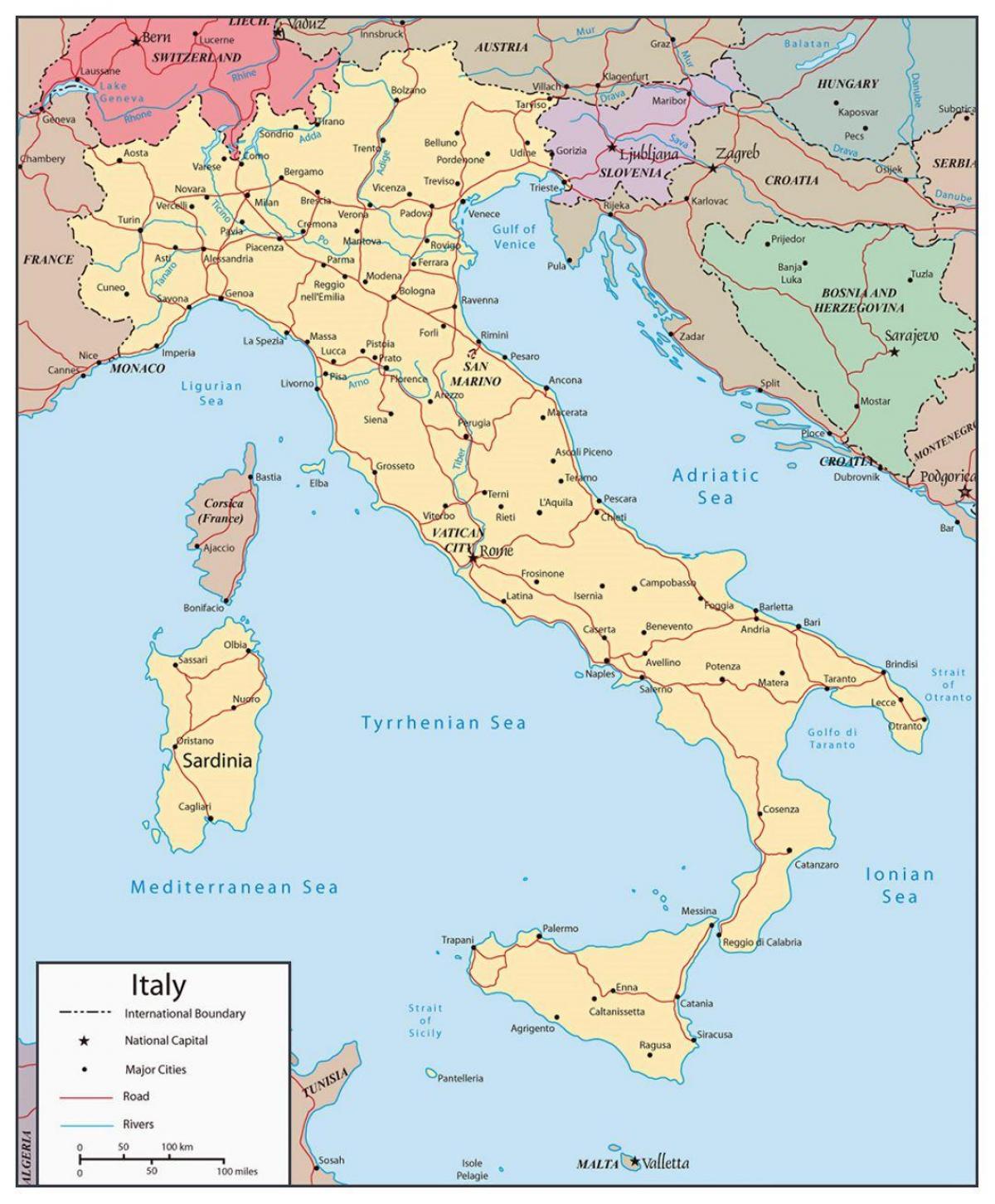 The rivers in Italy map shows the principal rivers with their names of Italy. The rivers map of Italy will allow you to find the main rivers which flow in and through Italy in Europe. The Italy rivers map is downloadable in PDF, printable and free.

The rivers of Italy have been important throughout history, from the time of the Roman Empire and even today. Italy rivers have been the primary water sources of this peninsular nation, with major cities springing up along the river banks for easy access to fresh water. There are over a thousand rivers and streams in Italy as its shown in Italy rivers map. The major rivers in Italy include the Po River, the Tiber, Arno, Reno, and Adige Rivers.Major rivers draining into the Adriatic Sea include the Po, Adige, Reno, Savio, and the Isonzo.

The Po is the longest river in Italy, flowing through Turin and Ferrara, before emptying into the Adriatic Sea after about 652 kilometers (405 miles) as its mentioned in Italy rivers map. The Adige River is also quite long, flowing 410 kilometers (250 miles) from the border of Austria and Switzerland over near Verona and out into the Adriatic Sea. The Tiber flows through Rome, and drains into the Tyrrhenian Sea to the west of Italy.

The Tiber is the third longest river in Italy, flowing about 406 kilometers (252 miles) from the Apennine Mountain range, through the regions of Emilia-Romagna, Umbria, and finally Lazio, where it reaches Rome as you can see in Italy rivers map. The Arno eventually flows into the Ligurian Sea after first passing through Florence in the Tuscany region. Each of these and the other rivers of Italy has many smaller tributaries, which carry the fresh water to other cities and areas of the country.

Much of Italy is covered by mountains as its shown in Italy mountains map. The Dolomite mountains which extend across northern Italy are part of the Alps mountain range. The Apennine mountains cut down the center of Italy, stretching from north to south, dividing the east and west coasts. Italy is mostly mountainous with ranges over 700 metres covering a third of the country. The best known ranges are the Alps, the Dolomites and the Apennines.

The Apennines form the backbone of the country running down the full length of the Italian peninsula from the Cadibona Pass to the tip of Calabria, continuing onto the island of Sicily as you can see in Italy mountains map. The range is about 2,000 kilometres long. Although narrow at each end, only about 32 kilometres wide, it is about 190 kilometres wide in the Central Apennines, east of Rome, where the "Great Rock of Italy" (Gran Sasso d'Italia) provides the highest Apennine peak at 2,912 metres. This area also includes the only glacier in Italy, Calderone, the southernmost in Europe. 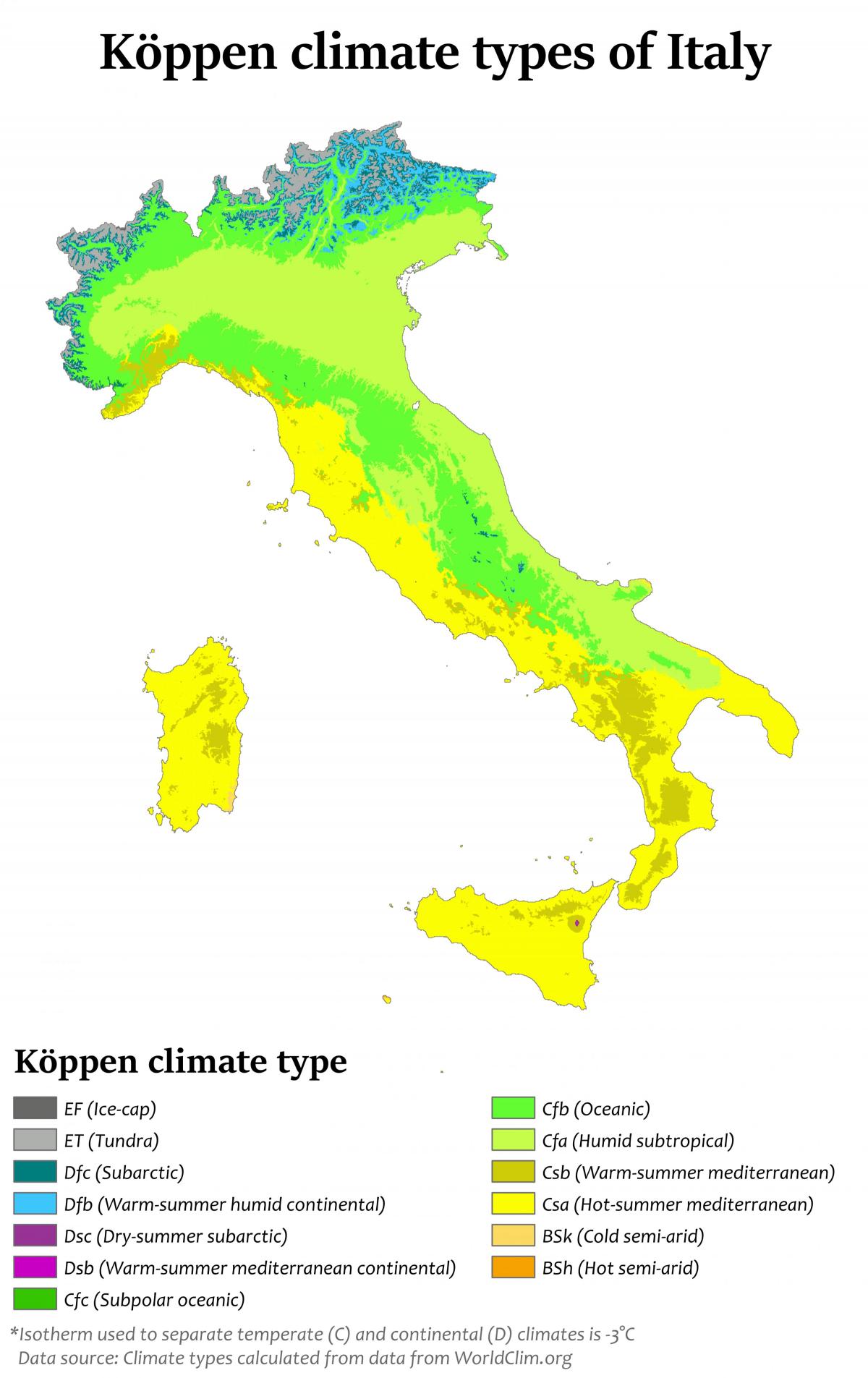 Most of Italy has a Mediterranean type of climate, which has cool, rainy winters and hot, dry summers as its shown in Italy climate map. Winter temperatures along and near the coasts of southern Italy seldom drop to freezing in winter, and summer temperatures often reach 90° F (32° C) or higher. Winter is the rainy season, when streambeds that remain empty during much of the year fill to overflowing and flash floods are common. Summers are dry, and certain crops, especially fruits and vegetables, must be irrigated throughout much of the peninsula and on the islands.

The climate of northern Italy differs greatly from that of the south. Winters tend to be cold, with heavy snowfall in the Alps, much rain, and fog as its mentioned in Italy climate map. Summers are not as hot, and summer rains aid farming. With its hot, dry summers and cool, wet winters, Italy experiences a mediterranean climate. Winters in Italy are cool and humid in the north and the mountainous zone. Sometimes cold air from northern Europe can spread south into Italy, bring snow to most mountains, while the coasts are kept warm by the high sea temperatures. Storms like the Mistral can bring snow and gales, sometimes even in southern districts of Italy.

The summer can be quite hot in Italy, mainly in the south of the peninsula, with high nocturnal temperatures of usually 28-33°C, but sometimes even 40°C as you can see in Italy climate map. Thunderstorms are quite common especially in the northern areas. The mediterranean climate in Italy has often local variations. Surrounded by warm seas and with mountains close by, the coast always has a breeze; mountain areas are usually cooler with clear sunny skies, but sometimes local showers or thunderstorms in the afternoon. Hot air rising from the sea can cause heavy thunderstorms especially in early autumn, but these bring often the only summer rain that rapidly evaporates. In spring the Sirocco, a warm wind from Africa, raises the temperature of the peninsula. In The summer these Winds can bring very hot, unpleasant weather, sometimes even up to the northern districts of Italy.