You can find on this page the Italy road map to print and to download in PDF. The Italy driving map presents the detailed road network, main highways and free motorways of Italy in Europe.
Italy road network with a total length of about 487,700 km, it comprises both an extensive motorway network (6,400 km), mostly toll roads, and national and local roads as its shown in Italy road map. 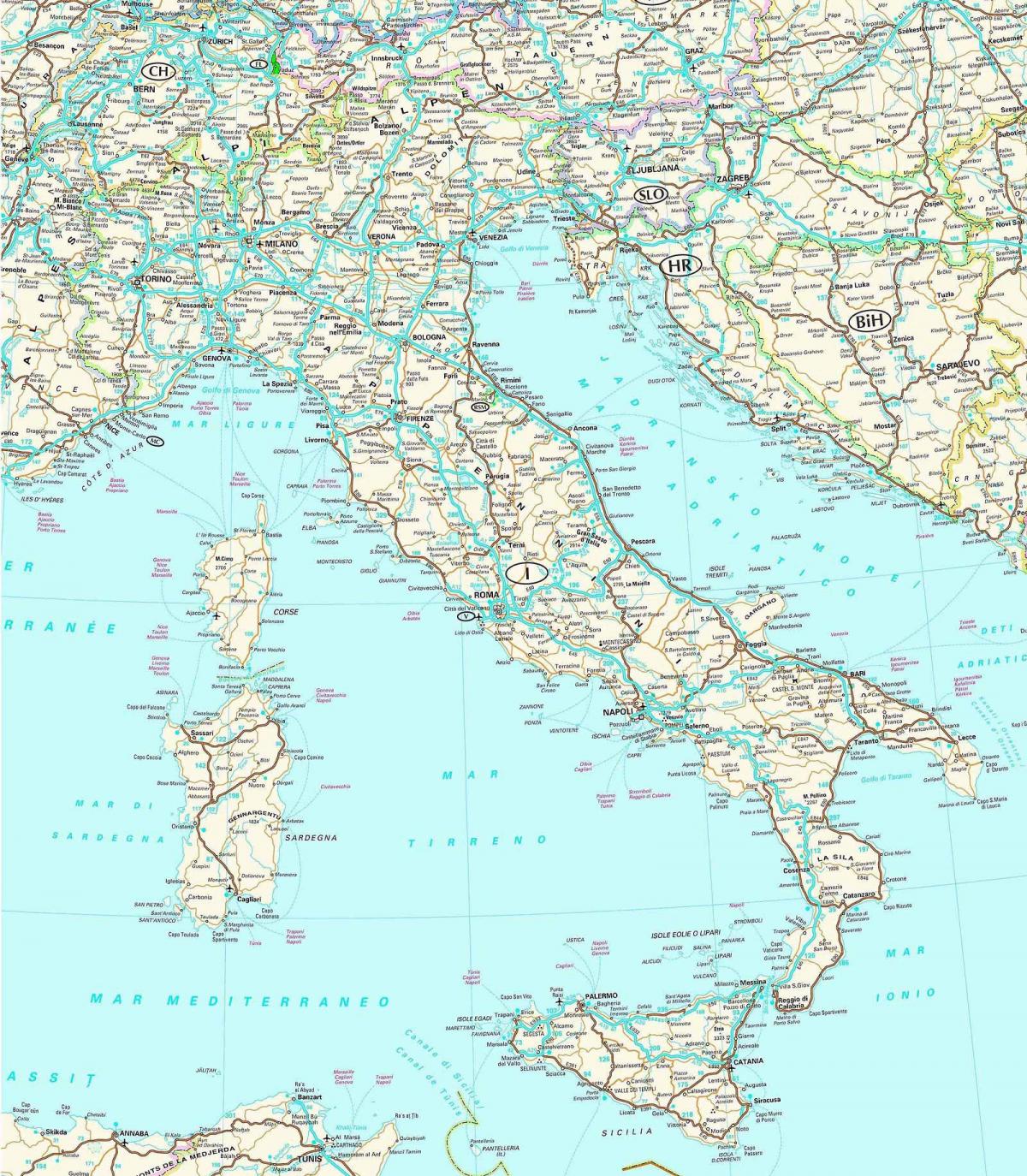 Italian roads are named with the prefix A and are numbered from 1: the A1 is the Autostrada 1. Autostradas have a speed limit of 130 Km/h, but drivers who only possess A-category licences may only drive at a maximum speed of 100 Km/h for their first three years. The road signs are white with black text, except for strada statale and strada provinciale, which are blue with white text as you can see in Italy roads map. Strade Statale: often dual carriageway, not tolled, usually lead to cities or town centres; they are numbered and named with the prefix SS and have a speed limit of 110 Km/h for dual carriageway, and 90 Km/h on open road.

Strade Regionale as its shown in Italy roads map: denoted by the initials SR, these roads are maintained by regional authorities and resemble the stradale statale. Strada Provinciale: regional roads which are (sometimes) numbered with the prefix SP and usually have a speed limit of 90 Km/h. Strada Bianche: can be, literally, white roads that are unpaved/not tarred and connect rural areas; they are of varying quality. Strada Comunale - Municipal roads managed by the local authorities. They are identified by the initials SC and speed limits vary. 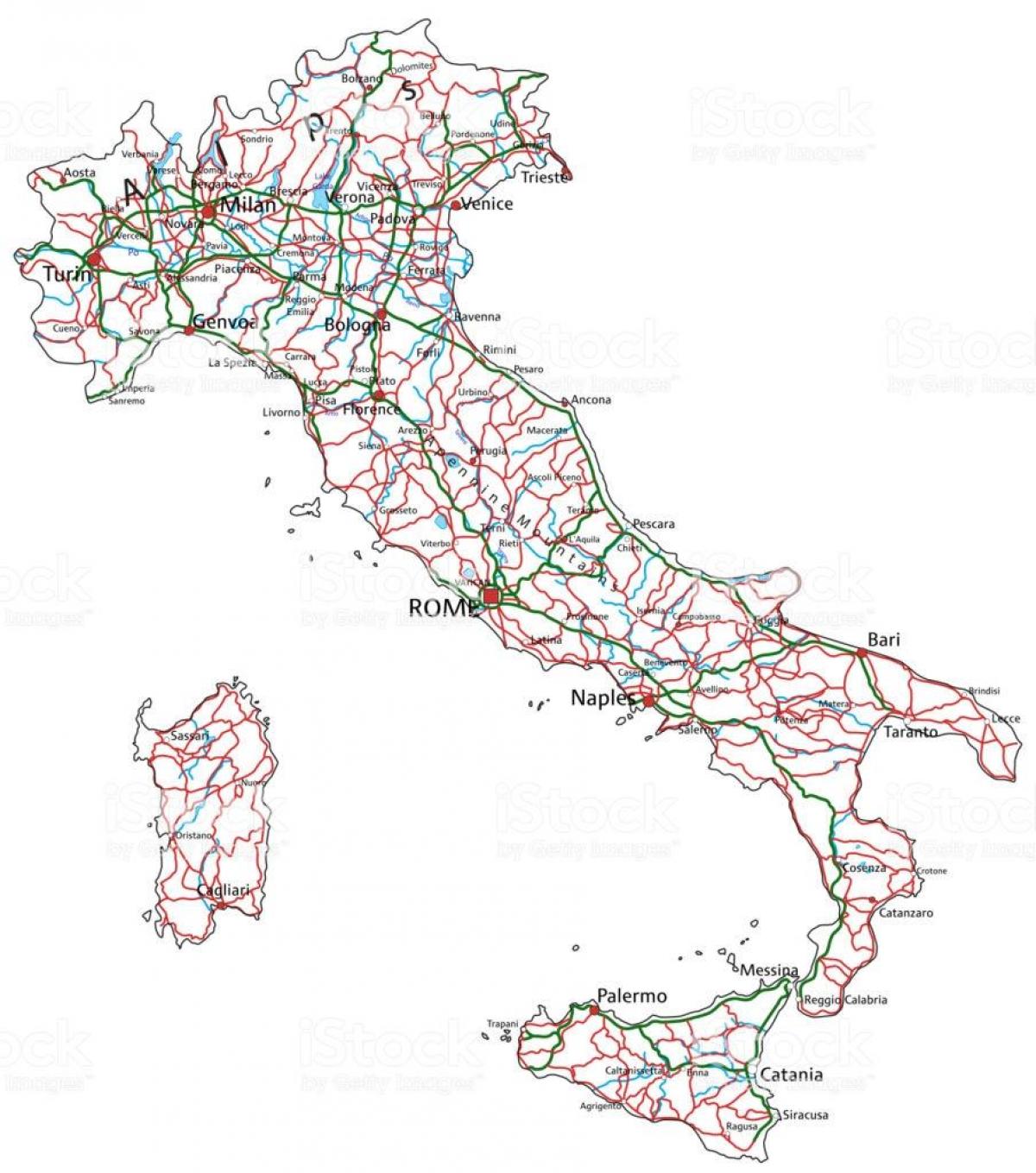 In 1924 Italy began the construction of toll motor highways, or autostrade, that soon totaled 320 miles (515 km) in length as you can see in Italy highway map. Although these did not attain the standards of later express highways, they did incorporate the features of limited access and elimination of grade crossings. Regional highways used to exist only in the region of Aosta, which is not further subdivided into provinces. Therefore it has regional highways instead of provincial highways. Recently, all SS roads except the SS26, SS26dir and S27 have been replaced by SR roads.

Numbers 10 and higher are assigned beginning in the north and moving south to 112. Numbers 113 to 124 are on Sicily, and 125 to 134 on Sardinia as its shown in Italy highway map. Then numbering continues in the north again from 141, quickliy going south to 200 (in Sardinia again) and higher numbers are spread all over the country. New numbers are probably assigned sequentially. Currently the highest known number is 700. Many of the high numbers are recently upgraded former provincial highways (e.g. SS659, SS663).

After the war the express highway of Italy movement gained momentum, slowly at first because of financial difficulties and the urgency of postwar reconstruction, then more rapidly. By 1950 eight U.S. states had toll roads that met express highway standards and totaled more than 750 miles (1,210 km) as its mentioned in Italy highway map.